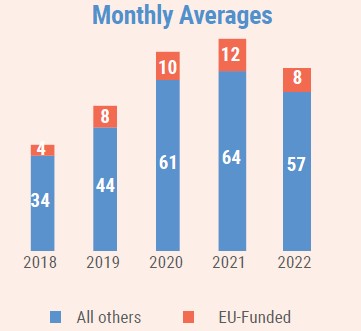 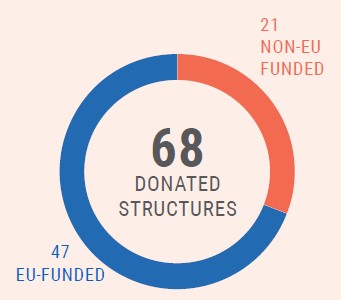 In June 2022, the Israeli authorities demolished, seized or forced people to demolish 96 Palestinian-owned structures across the West Bank, including East Jerusalem, twenty of which had been provided as donor-funded humanitarian aid. As a result, 79 people, including 36 children, were displaced, and the livelihoods or access to services of about 6,400 others were affected. All but two of the structures were targeted for lacking building permits, which are nearly impossible for Palestinians to obtain in Area C and East Jerusalem. 84 of the structures were in Area C, 10 were in East Jerusalem, and two were punitively demolished in Area B.

Of the 20 donor-funded structures demolished or seized in June 2022, eleven were funded by the EU or its Member States, for a total value of more than 18,600 euros; all of them were in Area C. Most of the destruction occurred in Ibziq (Tubas), an area designated by the Israeli authorities as a ‘firing zone’ for military training, and where Palestinian communities are at risk of forcible transfer (see below). Another 55 structures funded by the EU or its Member States, valued more than 222,000 euros, received stop-work or demolition orders, the highest number of humanitarian aid structures placed at risk of demolition in a single month, since OCHA began recording the practice in Date. The majortity of these structures were in Massafer Yatta, southern Hebron.

Twenty-eight of the 96 structures demolished or seized in June were in herding communities in Israeli-designated ‘firing zones.’ Nearly 30 per cent of Area C is designated as such, and the 38 Palestinian communities in these training areas are among the most vulnerable in the West Bank, with limited access to essential services and basic infrastructure. In the herding community of Ibziq, in the northern Jordan Valley, the Israeli authorities demolished 19 structures, five of which had been provided as humanitarian assistance by the EU or its Member States in response to previous demolitions. 23 households, comprising 143 people, including 62 children, were affected. 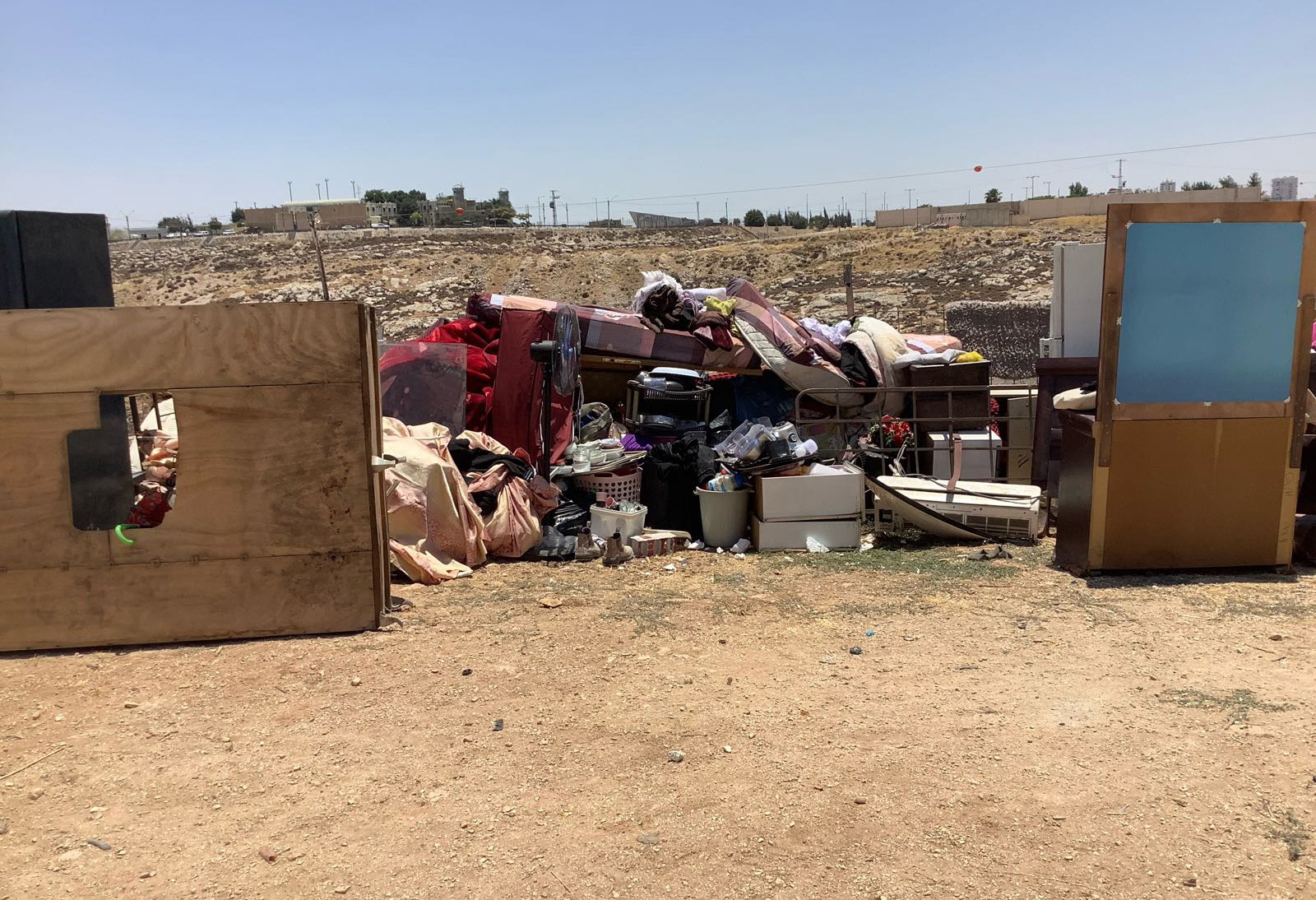 Demolition of residential structure a in Anata ©Photo by OCHA.

In Khirbet al Fakheit and Mirzek, both in the Massafer Yatta area of southern Hebron, the Israeli authorities demolished a total of nine structures, all of which had been provided as donor-funded humanitarian aid in response to previous demolitions. As a result, 38 people, including 16 children, were displaced. On 4 May, the Israeli High Court of Justice approved the eviction of Palestinians living in Massafer Yatta, putting 1,144 people, including 569 children, at imminent risk of forcible transfer. On 23 June, the Humanitarian Coordinator a.i., called for a halt to demolitions, military activities and other increasingly coercive measures, so that residents can remain in their homes in safety and dignity.

In June, of the 96 structres targeted, two  were seized without warning in Area C, preventing the owners from objecting in advance. This represents a significant decrease in the use of this procedure compared with the monthly average of seized structures (35 structures) during the first half of 2021.

Additionally, in the Area C communities of Ni’lin and Bir Zeit (both in Ramallah) and Al Buweib (Hebron), the Israeli authorities demolished a total of four structures based on Military Order 1797, which provides only a 96-hour notice and very limited grounds for legally challenging a demolition. This affected five households, comprising 24 people, including 12 children. A total of 201 Palestinian-owned structures have been demolished based on this order, since it came into effect in July 2019.

Ten structures, including five homes, were demolished in East Jerusalem: eight were demolished by the Jerusalem Municipality and two by the owners, following the issuance of demolition orders. On 1 June, the authorities demolished a home in Al ‘Isawiya, displacing two households comprising eight people, including four children, and affecting another two households of two people. The households had been paying fines as a penalty for lacking Israeli-issued building permits.

In the first six months of 2022, the proportion of structures demolished by their owners in East Jerusalem, following the issuance of demolition orders, reached 44 per cent, up from an average of 35 per cent in the previous five years. This is attributed to new Israeli legislation, which limits the authority of Israeli courts to intervene and enables the Jerusalem Municipality to exert pressure on families to demolish their properties themselves.

On 1 June, the Israeli authorities punitively demolished a residential structure in Ya’bad (Jenin), in Area B, home to the family of a Palestinians who had killed five people in Israel in month/year,  before being shot dead. Two apartments were destroyed; as a result one household of five, including one child, was displaced, and another household of seven, including three children, was otherwise affected. During the operation, clashes were reported between Palestinian residents, who threw stones at Israeli forces who fired live ammunition, killing one Palestinian man and injuring another , who later died of wounds. On 8 June, the Israeli High Court of Justice approved the punitive demolition of the family homes of two Palestinians indicted for killing an Israeli settlement guard in April 2022. Since the beginning of 2022, six homes have been demolished on punitive grounds, compared with three in all of 2021 and seven in 2020. Punitive demolitions are a form of collective punishment and as a such are illegal under international law as they target the families of a perpetrator, or alleged perpetrator, who are not involved in the alleged act.

Additionally, on 7 June, the Israeli authorities sealed off an under-construction artesian water well in Area B in Beit Lid village (Tulkarm), without any prior notice. The well was intended to replace an old well that is used as the main drinking water source of at least 1,000 Palestinian families in  the community.